Of course this was completely unplanned.  Thursday, May 14th (I date it for posterity’s sake) after dinner at about half past six Matthew and I stepped out for Matthew to bike ride to the local school yard.  It’s just a couple of blocks away and they have a little track on level ground for him to circle.  We turned to go into the backyard and right there on the side of the house was a local stray cat, who was caught by surprise.  Seeing the two of us, she darted up the block.  But nearby, frozen with surprise was a little kitten.  It didn’t know what to do, and when we approached it he sped in a different direction than the big cat, into our back yard, where he hid behind one of the garbage cans.

We chased him and I reached behind and pulled him out.  It was the cutest little thing.  I didn’t know if I should leave him out, and yet taking him in would be a burden.  We had never had cats before.  We already have a demanding dog, who is still an overactive pup.  We already have a five year old boy who consumes all our time when he’s not in school or asleep.  I could have put him down and let his mother—if that was his mother who darted off, though I some doubt because the coloring was completely different, and she, if it were a she, showed no motherly concern for the tike.  But he was so darned cute.  And I don’t know how many kittens survive into cathood living in the streets.  He was so passive in my hands.  He wasn’t afraid.

I called my wife over.  If she said no, that would have been the end of that.  She too warmed to him.  She gave me a bunch of questions—legitimate questions on the difficulties.  She had suspected she was even allergic to cats.  I just shrugged.  She didn’t say no.  He had the prettiest face I had ever seen on a kitten.  Matthew insisted we keep him.  So we brought him in.

We didn’t know how to care for a kitten.  We couldn’t even tell if he was male or female.  My wife emailed a few of her friends who have cats and they recommended replacement milk.  We weren’t sure how young he was.  I went on the internet and found something that you could gage an age.  I estimated four weeks.  That was too young to be taken from his mom, so we rushed out to get the replacement milk.  We set up a crate from when Rosie was a small pup for him.  He drank the milk.  He wasn’t scared and he just relaxed in your arms.

We got in to the Vet the very next day.  By then I had found a better gage to estimate his age, which I figured now to be five weeks.  The Vet agreed.  He was healthy, though he’s had diarrhea.  We learned about kitty litter and feline bathroom habits.  He quickly took to a litter box.  He’s so darned cute covering his movements, and pawing the granules.  The Vet said he was male.  My wife wanted to name him Thor, which I hated, and I wanted to name him Simba, which my wife hated.  Matthew named him Tiger, and it has stuck.

When we went to fill out the Vet ID form, it asked for a breed.  We had no clue, so we asked the woman at the desk.  “Domestic Shorthair,” she said with authority.  Then it asked for color, and he has several colors.  “What color would you say he is?” I asked.  I held him up, she squinted.  “Grey Tabby.”  So there’s all the pertinent information.

OK, here are some pictures.  He’s being kept in Matthew’s room for now. 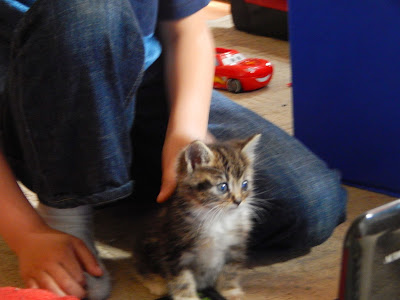 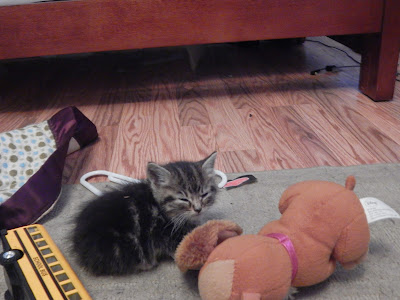 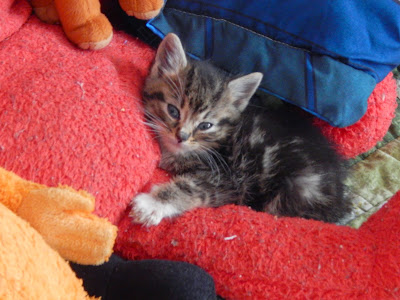 So far Matthew and Tiger are getting along great, even though Matthew handles him a little roughly.  Here they are watching a movie on the video player. 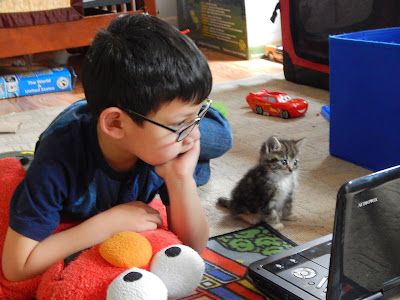 And I think my wife to her surprise has taken to Tiger the most. 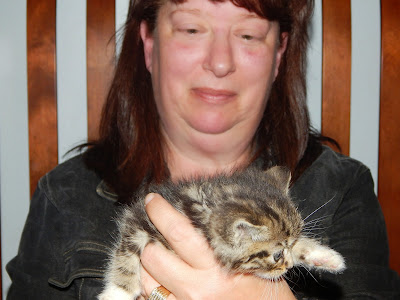 And now I have someone in the house who has as grey a head of hair as I do. 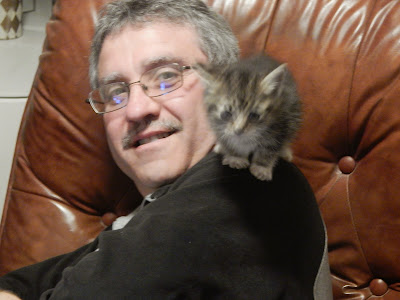 Now when they find a stray grey hair on the ground, they can’t say it’s from me.