The idea for this post came from a discussion on Kathy Schiffer’s blog, Seasons of Grace.   She starts her post with this:


She stands 33 feet tall, her body bronze and red in the winter sun, slashed open to reveal her skull, her tissue, and her developing fetus.


“The Virgin Mother” is arguably the ugliest statue of Mary ever created.


The creation of internationally acclaimed British artist Damien Hirst, the controversial work stands on the historic Old Westbury estate belonging to real estate mogul Aby Rosen; and Rosen’s neighbors are not happy about it.  They’re so unhappy, in fact, that a lawsuit has been filed and a public hearing has been scheduled for May 19.


So how can a statue of the Blessed Mother be so controversial?  Well, it is if it looks like this.

The comments to Kathy’s post were somewhat taken aback, and if they didn’t say it was sacrilegious they certainly implied it.  Here’s my comment at Kathy’s post: 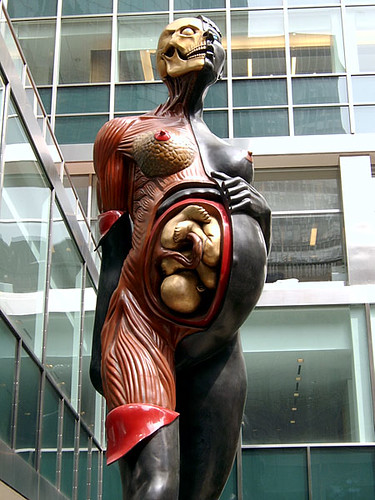 I don't think it was meant to be disrespectful as a lot of modern art is toward Christianity. I kind of like the idea of seeing Jesus inside the womb. However, I don't see the point of the naked breasts, intestines, and distorted face. On balance I don't care for it.


The picture Kathy posted wasn’t as zoomed in as these I’ve posted.  Now having digested a few closer views I strongly dislike it, not just “on balance.”  It’s hideous.  Someone named Deoacveritmyfaithsustainsm replied to my comment.


I don't think you understand what you're saying.
Knowing how Our Lord Jesus was in the womb of Our Lady perhaps it is not for us to know because everything about His Incarnation and His birth was miraculous in nature and part of a sacred Mystery.
This statue is SACRILEGIUOUS for many reasons, but let's focus on some of these reasons the statue is trying to portray Mary like any other woman. It is true She was a woman but a woman not stained by sin, and second the artist portrays what he calls Mary naked how dare he???
Damien Hirst when intent is malicious and it is meant to offend Our Lady who is the Most Holy Mother of God.
IF he is not a Christian then the least he can do is respect Christianity.
This is satanic and I don't want to be in his shoes when the Lord calls him to His Judgement Seat.
""Jesus is Coming
…10And he said to me, "Do not seal up the words of the prophecy of this book, for the time is near. 11"Let the one who does wrong, still do wrong; and the one who is filthy, still be filthy; and let the one who is righteous, still practice righteousness; and the one who is holy, still keep himself holy." 12"Behold, I am coming quickly, and My reward is with Me, to render to every man according to what he has done.…"
"Athanasius
"The Word begotten of the Father from on high, inexpressibly, inexplicably, incomprehensibly, and eternally, is he that is born in time here below of the Virgin Mary, the Mother of God" (The Incarnation of the Word of God 8 [A.D. 365]). "


My reply:
"the statue is trying to portray Mary like any other woman"
Renaissance art all portrays Mary as a regular woman. I'm not arguing that the artist is devout or even Christian. I just don't see any cynicism in there. He's not bashing Christianity in any way that I can see. Like I said elsewhere, he's trying to be hip and artsy with a traditional art motif, the Virgin and child. And he did a poor job of it.


My response didn’t actually respond to the notion of sacrilegious, mainly because I wasn’t sure what the theological definition is.  OK, I looked it up in the Catholic Encyclopedia.  The short answer:
Sacrilege is in general the violation or injurious treatment of a sacred object. In a less proper sense any transgression against the virtue of religion would be a sacrilege.


It’s a lengthy definition, so go read the whole thing if you are inclined to do so.  There are two parts to that definition, violation done to a sacred object and transgression to “the virtue of religion” for it to be considered sacrilege.  Now the first part of the definition clearly cannot apply since the statue in question was not a sacred object, since the artist created it himself.  So then it comes down to whether it was a transgression against the virtue of religion.  Now I don’t have a lawyerly mind, so I couldn’t tell you exactly what that means.  I suppose it means similar to the dictionary definition of sacrilege: “the violation or profanation of anything sacred or held sacred.”


Well, the Virgin Mary is certainly held sacred, but the question then rests on whether it is a profanation.  Here, however, it becomes subjective, unless the artist came out and spoke of  his thoughts.  This is what Damien Hirst says about this statue on his website:


The Virgin Mother’ is a 33-foot, thirteen-ton bronze sculpture, cast at Pangolin Editions foundry, in Gloucester. The work, which Hirst has rendered in a variety of different editions, can be considered a female version to Hirst’s monumental ‘Hymn’ (1999-2005). This first edition includes a painted anatomical cross section. The figure’s stance recalls Edgar Degas’s ‘Little Dancer of Fourteen Years’ (c.1881). Hirst explains the significance of the reference to Degas: “It is kind of naughty; she shouldn't really be pregnant. I wanted a feeling of that. Anyone who is pregnant looks old enough, that's the problem.”


‘The Virgin Mother’ is intended as an outdoor sculpture and has been installed in the courtyard of Lever House, New York, outside London’s Royal Academy, and on Fontvieille Harbour, Monaco.


Well, that’s certainly evasive.  Or is it?  “She shouldn’t really be pregnant.”  Well, neither should our Virgin Mary since she has not had “relations with a man” (Luke 1:34).


Now on Kathy Schiffer’s post, there was another reply to my original comment, this one by someone named Bridgeport Guy:
Come on, showing the breasts of Our Lady. Aby Rosen should be taken to task for did paying this. He's Jewish and mega wealthy. I wonder what kind of reaction there would be if a wealthy Catholic displayed a huge statue offensive to what Jews hold most dear. You can rest assured the media would make a circus out of it.
And I replied to him:
I didn't know he was Jewish. Anyway, he's only the collector, not the artist. I think it's a poor attempt to be hip and artsy. The breasts are there to emphasize the motherhood. Clearly he's pushing acceptable boundaries, but it's not subversive. I just don't see any cynicism in there, like in the "Piss Christ" crap. How would you articulate his cynical point?


He never answered my question.  It comes down to the artist’s intentions which I think can be reduced to two questions.  (1) Does this art work toward a subversion of the sacred?  (2) Is it trying to make a cynical statement, that is, in this case, disparaging of Mary’s eminence?  Obviously Bridgeport Guy and Deoacveritmyfaithsustainsm say so.


Here’s my point.  It is quite possible to see the theme here to be respectful of the Virgin Mary.  She is human, in theological terms, a “creature,” and the display of her humanity is not sacrilegious if the intent is to highlight something of value.  Here her pregnancy is clearly the value intended to be highlight, and, if I may, raised to a superlative value.  Hirst is trying to add to the tradition of Madonna and child by showing the child inside the mother’s womb.  So no, I don’t think the work intends to subvert the sacred or disparage Mary’s eminence.


Still it’s rather ugly.  Yes, Hirst thinks he’s hip and artsy, but I have to say it’s crap.  The idea (the anthropologically human Madonna) isn’t that interesting to justify the gross insides.  He could have gotten the point of the human Madonna across without the grossly exposed cutaway.  What exactly is beautiful here?


Final Note.  On Kathy Schiffer’s post there was one commentor, a Steve Kellmeyer, who along with me, argued the statue wasn’t sacrilege.  But he went so far as to argue it was actually beautiful.  He posted his thoughts on his blog, The Fifth Column, if you wish to read them.  It’s a very good argument, though the statue is still ugly to me.