Part 1 on this series on John’s Gospel is here.
Part 2 is here.

I might divide it a little differently.  I can’t do better than the Book of signs for the first twelve chapters, but I think the Book of Glory could be subdivided into chapters thirteen through seventeen as the Last Supper narrative (though no supper is actually discussed) and the Passion narrative.

Another of the repeated phrases is that of being “lifted up.”  The first one comes in chapter three.  “And just as Moses lifted up the serpent in the desert, so must the Son of Man be lifted up so that everyone who believes in him may have eternal life.” (3:14-15). But it continues with the famous statement of faith: “For God so loved the world that he gave his only Son, so that everyone who believes in him might not perish but might have eternal life.  For God did not send his Son into the world to condemn the world, but that the world might be saved through him” (3:16).  I do not think it a coincidence that it come right before why God sent Jesus into the world.  You can almost compress those lines into “God sent Jesus into the world to be lifted up.”

The second instance of the lifted up saying comes in chapter 8.  It comes during an argument with the Jewish leaders: “So Jesus said (to them), “When you lift up the Son of Man, then you will realize that I AM, and that I do nothing on my own, but I say only what the Father taught me.”  Here Jesus connects the lifting up with the “I AM” statement, what God said His name was to Moses.  You can compress this into “When I am lifted up, you will realize I am God.”

Side note.  When Jesus refers to “The Jews” throughout this Gospel, I believe He is referring to the Jewish leaders.  Much has been made in this Gospel to justify anti-Semitism.  Referring to them as the Jews as if they are somebody different doesn’t make sense.  Jesus and the disciples are all Jews.  This Gospel doesn’t seem to distinguish between the different types of Jews, such as the Pharisees or the Scribes.  He does once or twice but mostly not.  That’s why I really believe the anti-Semitism is improperly interpreted.  Since there is no distinction, and since Jesus is Jewish as well as His followers, “the Jews” are His specific opposition, the leaders in the Sanhedrin.

The third instance of the lifted up phrase comes in chapter twelve.  Jesus announces His coming glory after riding into Jerusalem on a colt of a donkey:

Jesus answered and said, “This voice did not come for my sake but for yours.  Now is the time of judgment on this world; now the ruler of this world will be driven out.  And when I am lifted up from the earth, I will draw everyone to myself.”

Commentary notes say the “ruler of this world that will be driven out” is Satan.  This can then be compressed to “When I am lifted up, I will drive out Satan and draw all to myself.”

So take all three of these compressed “lifting up” statements and put them side by side:
(1) “God sent Jesus into the world to be lifted up.”
(2) “When I am lifted up, you will realize I am God.”
(3) When I am lifted up, I will drive out Satan and draw all to myself.” 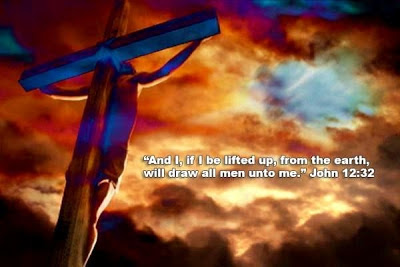 If you weren’t aware, this lifting up echoes Moses lifting up a serpent of a brass serpent in Numbers 21:4-9 as a form of redemption: “When I am lifted up, I will drive out Satan and draw all to myself.”  So this being lifted up connects with driving Satan out with a symbol of the serpent that was Satan in the Garden of Eden.  Christ being lifted up reverses the sequence in the Garden.  Adam and Eve were tempted by Satan and ate of the forbidden fruit and were cast out.  Christ on the cross lifted up becomes a redeeming fruit on a new tree (the cross) that drives Satan away and restores wholeness by drawing man back in.  Does that make sense?

I think all the events with the various signs are fascinating in their own way.  In this read, the events with the raising of Lazarus particularly caught my eye.  We know the story.  The raising of Lazarus from the dead is a prefiguring of Christ’s being raised from the dead.  But I think the language John uses expands the meaning.  For instance, when Jesus first hears of Lazarus’ illness, He says: “This illness is not to end in death, but is for the glory of God, that the Son of God may be glorified through it.”  Glory is the key word, and it doesn’t mean the reception of honor.  Glory in John’s Gospel is the manifestation of God’s presence, the revelation of His divinity.  It has deep roots in the Old Testament, going back to Exodus: "The glory of the LORD settled on Mount Sinai” (Exodus 24:16).

We see Jesus intentionally takes His time in getting to Bethany, and when He gets there Lazarus has been dead.  But notice how long he has been dead.

“When Jesus arrived, he found that Lazarus had already been in the tomb for four days.” (John 11:17)

Most numbers in the Bible tend to come repetitions.  Forty denotes a long period of time, Twelve (as in twelve tribes of Israel and twelve apostles) denotes a certain completeness, three (Trinity) is perfection.  Four is not common number.  If Lazarus’ death and being brought back to life is a foreshadow of Christ’s death and resurrection, then why wouldn’t Jesus have waited for three days rather than four?  Jesus seems to be in command of the time in the story.

Here’s another interesting detail.  When Jesus gets there, He is met by Martha, Lazarus’s sister, the same Martha from the Martha and Mary event from Luke’s Gospel.  I am particularly struck by what Martha says.

When Martha heard that Jesus was coming, she went to meet him; but Mary sat at home.  Martha said to Jesus, “Lord, if you had been here, my brother would not have died.  [But] even now I know that whatever you ask of God, God will give you.” Jesus said to her, “Your brother will rise.”  Martha said to him, “I know he will rise, in the resurrection on the last day.”  Jesus told her, “I am the resurrection and the life; whoever believes in me, even if he dies, will live, and everyone who lives and believes in me will never die. Do you believe this?”  She said to him, “Yes, Lord. I have come to believe that you are the Messiah, the Son of God, the one who is coming into the world.”  (John 11:20-27)

What Martha says there at the end is very similar to what Peter says “You are the Messiah, the Son of the living God.”  (Matt 16:16)  It is interesting that Martha is raised to such a high level.  The women in John’s Gospel are so diverse, from the Blessed Mother to the Samaritan woman to the woman caught in adultery and Martha and Mary Magdalene.  I thought Luke’s Gospel particularly spoke to women, but I think John’s is even more so.

And then we get Mary who comes out to cry to Jesus.

When Mary came to where Jesus was and saw him, she fell at his feet and said to him, “Lord, if you had been here, my brother would not have died.”  When Jesus saw her weeping and the Jews who had come with her weeping, he became perturbed and deeply troubled, and said, “Where have you laid him?” They said to him, “Sir, come and see.”  And Jesus wept.  So the Jews said, “See how he loved him.”  But some of them said, “Could not the one who opened the eyes of the blind man have done something so that this man would not have died?” (John 11:32-37)

People are always quick to point out that Jesus wept here.  I think the presumption is that He wept for Lazarus’s death, but I don’t think so.  First He intentionally delayed so to ensure Lazarus died but He also knows He will raise Lazarus shortly.  I think Jesus wept because of the sadness and weeping around Him.  Mary runs out and falls on her knees weeping.  The Jews around her are also weeping.  He is witnessing the love for Lazarus and the pain of loss of that love to those who hold him dear.  I think Jesus is weeping for the hurt those living are feeling.  And Jesus then takes the action He intended all along.

So Jesus, perturbed again, came to the tomb. It was a cave, and a stone lay across it.  Jesus said, “Take away the stone.” Martha, the dead man’s sister, said to him, “Lord, by now there will be a stench; he has been dead for four days.”  Jesus said to her, “Did I not tell you that if you believe you will see the glory of God?”  So they took away the stone. And Jesus raised his eyes and said, “Father, I thank you for hearing me.  I know that you always hear me; but because of the crowd here I have said this, that they may believe that you sent me.”  And when he had said this, he cried out in a loud voice, “Lazarus, come out!”  The dead man came out, tied hand and foot with burial bands, and his face was wrapped in a cloth. So Jesus said to them, “Untie him and let him go.” (John 11:38-44)

Again the four days is emphasized.  Doesn’t the four days show a distinction between Christ’s resurrection and Lazarus’s return to life?  Is this a foreshadow of Christ’s resurrection or something more to teach us about man’s relationship to Christ?  When Jesus calls out Lazarus—some translations have it as “Lazarus, come forth”—isn’t that exactly what every person will hear on their death?  Notice that bands used for burial (I assume to prevent arms and legs from twisting under rigor mortis) are highlighted and still on, and Jesus says to untie him, an act of being freed.  I expect to hear one day, “Manny, come forth.”  May I be worthy to be untied.

It's always good to watch clips from Jesus of Nazareth.  I noticed though they changed the dialogue a bit.

Email ThisBlogThis!Share to TwitterShare to FacebookShare to Pinterest
Labels: Gospel of John, Jesus on the Cross, Lazarus, St. John the Evangelist